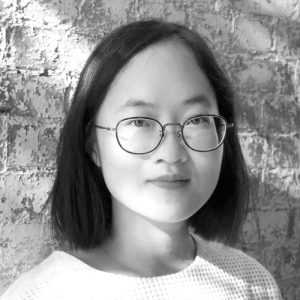 Born and raised in Xi’an, China, as well as Bowling Green, Ohio, Anni Liu is a poet, essayist, translator, editor, sensitivity reader, and educator. Liu’s work is published or forthcoming in Pleiades, Waxwing, The Journal, and elsewhere. Her honors include an Undocupoets Fellowship, a Katherine Bakeless Nason Scholarship to Bread Loaf Environmental Conference, and the National Society for Arts and Letters’ 2018 Literature Award for the best writing by a writer under 30 in the state of Indiana. Her work engages the subjects of immigration, capitalism and colonialism, loneliness, love, and the environment through lyric self-reflexivity. She lives in in Minneapolis with her partner and works at Graywolf Press.

Anni left mainland China as a child and has only been back once, in 2016. Since that visit she worked on writing and rewriting “Paroled,” an essay-poetry hybrid book that wrestles with what it means to be an “illegal alien;” an attempt to turn a state-issued and shame-laden categorical identification into a site of meaning and perhaps even cultural dissonance and resistance. She hoped that the form of the book became its own lyrical answer to the question of how to write from a position that is at once demonized and pitied, symbolically protected while legally persecuted, and finally silenced through the easily digested tales of suffering that are extracted and then publicized.

With help of the Red Wing Friends of Immigrants group, Anni worked to arrange a private virtual reading of her work-in-progress and informal conversation on immigration.