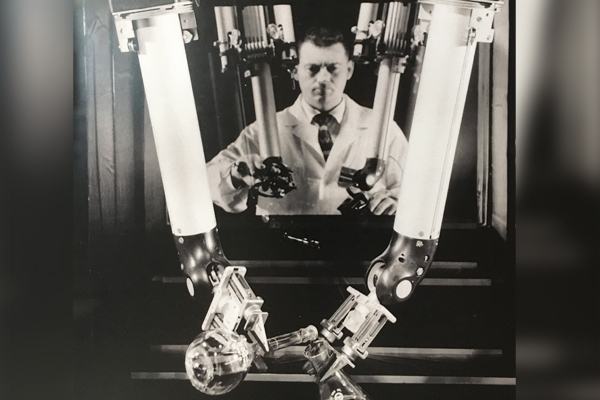 Join Rob Weber, Manager of Projects & Proposals at Central Research Laboratories (CRL), as he shares the fascinating history of CRL’s inception, founding, and growth on a one hour guided outdoor walking tour of the Tower View estate on Saturday, July 25th at 11:00 a.m. Register now as space is limited in order to ensure physical distancing. A second tour is also being offered later the same day at 1:00 p.m. Tour groups meet in front of Tower View Barn 15 minutes prior to the beginning of the tour.

In the fall of 1945, at the dawn of the cold war and Atomic Age, Central Research Laboratories Inc. (CRL), was founded by three graduates of MIT: Frank G. Chesley, Demetrius Jelatis and Gordon M. Lee. This company, which became one of the nation’s principal manufacturers of Master-Slave Manipulators, moved in the two laboratory buildings at Tower View and remained there until 1961.

Telemanipulators are mechanical “arms” that consist of a control (master) arm coupled to a remote (slave) arm via a series of gears, pulleys, and linkages. Movement of the control arm by an operator results in movement of the remote arm. This allows for the remote handling of materials produced by the nuclear industry that would otherwise be too hazardous to touch. CRL’s innovative products protected operators, and scientists while they performed critical research into atomic energy.

In 1954, an enclosure (now the Anderson Center office) was built to connect the two laboratory buildings, which was used by CRL as a crane bay and assembly area. In 1961, due to the need for increased space, a new CRL plant was built across Highway 61. With a legacy of 75 years of innovative experience, CRL has continued to develop and build a full line of remote handling and containment solutions including Telemanipulators, Transfer Systems, Glove Ports, and Waste Drum Transfer Systems. 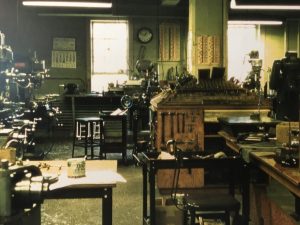 Rob Weber is Manager of Projects & Proposals for Remote Handling at Central Research Laboratories, a role he has held since 2017. Rob has been with the company since 2010. Other positions at CRL include Applications Engineering Leader and Techical Applications & Customer Service Manager. He earned his Bachelor’s degree in Aerospace, Aeronautical, and Astronautical Engineering at the University of Minnesota.