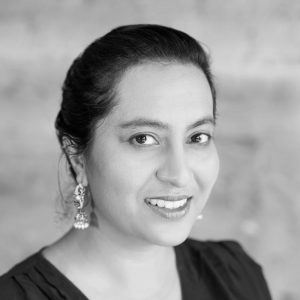 Preeti Kaur Rajpal is a poet based in Minneapolis, who grew up in California’s San Joaquin Valley. Preeti first began writing as a student of June Jordan in her Poetry for the People program. A 2019-2020 Jerome Hill Artist Fellow in Literature, her poems have been featured in Spook Magazine, Jaggery Lit, Blueshift Journal, Tupelo Quarterly, Lantern Review, and other publications. Her work is anthologized in Orison Books’ poetry anthology The World I Leave You: Asian American Poets Speak on Faith and Spirit and Blue Oak Press’ forthcoming poetry anthology They Rise Like a Wave: An Anthology of Asian American Women Poets.

At the Anderson Center, Preeti worked on developing her debut poetry manuscript, which has been accepted for publication by Tupelo Press. Her poems play with the acquisition of language, both political and vernacular. As a Sikh American woman poet, Preeti is writing about India’s Partition and the racialization of Sikhs in the post-9/11 era global War on Terror, through the lens of post-memory. Ultimately, her poems are about the question of belonging, both to family and to the nation-state. During her stay in Red Wing, Preeti led a chalk poetry activity in Central Park as part of Red Wing Arts Fall Festival.